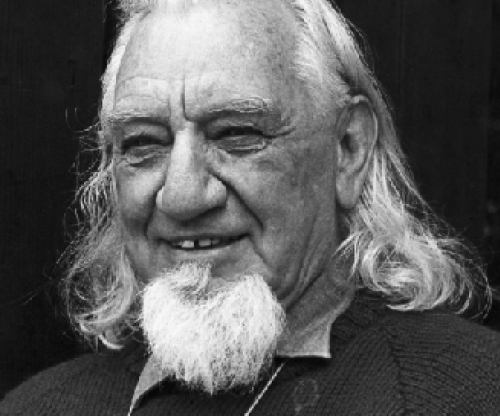 LUCKY MADLO SIBIYA was the son of a medicine man, himself a descendant of Chief Bambatha, but despite this noble lineage, Sibiya’s family were poor as Sibiya’s father had nine mouths to feed. Sibiya was a born artist and never received formal training in the field of art. Instead, his introduction to art came through an unusual experience. Sibiya’s father was a sangoma (witchdoctor). As a child, Sibiya spent most of his time watching his father performing rituals, and throwing bones on the floor – essential to the consultation. It was the shape of the bones and their patterns and not the rituals per se that fascinated the young Sibiya. The bones left him thinking about the nature of artwork that could emerge from such items. Such traditional images would later influence his worksWhen he was eleven years old his family moved the Sophiatown and later Soweto. He attended the St. Peter’s Seminary where he studied for seven years.

As a youngster he was introduced to the artist, Cecil Skotnes who took him on as a private pupil. For many years Lucky lived at Hammanskraal outside Pretoria, from where he worked in his modern studio. In 1974 he visited Europe and the USA. He became known as an engraver. Skotnes introduced Lucky to the wood panel and later the coloured woodcut. Ndebele designs and usage of colour is very prominent in his work.

Sibiya has done panels, serigraphs, colour woodcuts and free sculpture in wood, bone and metal. Central to nearly all his compositions is the human figure. Recurring figures included African matron and animals, birds, fish, and cattle. His woodcuts are timeless, reminiscent of the ancient traditional art of Africa, but also at the same time thoroughly modern.

His panels were cut in shallow relief and embellished with paint, and presented as a finished object in themselves. In certain areas of the panels he applied the different colours in layers so that the under-colour shines through, picking up light when correctly displayed.

He held his first one-man exhibitions at Gallery 101 in Johannesburg in 1971. He had various solo-exhibitions in South Africa but also exhibited in Swaziland and the United Kingdom. His artworks is represented in various private and national collections in South Africa, Australia, United Kingdom and United States of America.Lucky Sibiya is internationally renowned for his abstract paintings and sculptural carvings. Sibiya’s works have been exhibited, and collected locally and globally. His richly carved flowing rhythmic lines and painted wood panels are perhaps what he is best known for, yet he also experimented freely with mixed media and found objects. He mastered the art of reinventing the discarded by incorporating for example, scraps of broken piano, pieces of leather, wood, material and metal into his work. Lucky Sibiya made an enormous and lasting contribution to South African art. Numerous artists are inspired by his work. Lucky also supported other artists by collecting their work and involving himself in informal teaching and sharing his creative inspiration and expertise with young artists.